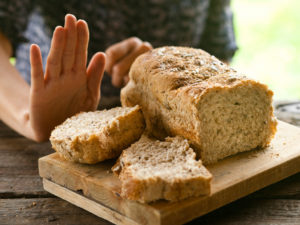 What normally happens in the gut?

In a typical functioning gastrointestinal tract, enzymatic activity breaks proteins into peptides and peptides into amino acids.  The intestinal lining absorbs the amino acids into the bloodstream, which carries the amino acids to the rest of the body providing nutrition.  Some incompletely digested peptides of the wheat gluten and related proteins can cross the lining of the small intestine and enter connective tissue beneath under certain conditions that increase the intestinal permeability, such as gastrointestinal infections.  Tissue transglutaminase (tTG2), an enzyme found in the connective tissue binds and changes these peptides in such a way that immune cells of individuals who express certain genes (HLA-DQ2 and –DQ8) have a greater binding  to these peptides and can activate immune responses that lead to injury and further increase in intestinal permeability.

The clinical presentation of celiac disease is highly variable

In children the disease is commonly present with failure to thrive, delayed puberty, chronic diarrhea, abdominal distension and anemia.  Symptomatic classical CD in adults presents with similar gastrointestinal symptoms, while in many patients is associated with extra-intestinal features such as anemia, osteoporosis, infertility, a chronic blistering skin condition and neurologic disorders with little or no gastrointestinal symptoms.  Symptoms associated with peripheral nervous system damage and uncoordinated muscle movements due to dysfunction of the cerebellum are the most common neurologic complications associated with the disease.  Seizures, chronic headache, depression and psychiatric disorders have also been reported.

How can wheat gluten affect the nervous system?

Several studies report elevated levels of anti-gliadin antibodies in patients with neurologic complications.  According to a theory, some individuals suffer from inadequate production of gluten-related digestive enzymes.  This in combination with increased gut permeability allows the peptides to leak into the blood stream, where they circulate and eventually cross the blood-brain barrier.  These peptides were shown, only in experiments conducted outside the body, to bind to opioid neuroreceptors and therefore are speculated to cause central nervous system effects by modulating opioid levels in the brains.  Different researchers investigating aspects of this theory often obtain conflicting results however.  Today the role of CD and NCGS in conditions associated with the nervous system still remains controversial and requires additional studies.

What symptoms are associated with gluten sensitivity?

Patients with non celiac gluten sensitivity usually have a combination of gastrointestinal symptoms (most commonly abdominal pain and chronic diarrhea) and systemic manifestations such as tiredness, headache, joint and muscle pain, leg or arm numbness, disturbance in attention, depression or anaemia.  The extra-intestinal symptoms are less frequent in children.  NCGS is increasingly often diagnosed in patients with IBS (gluten-sensitive irritable bowel syndrome).  Based on reports it is also more frequent (13%) in the CD patients’ first degree relatives.

Immunoglobulin A (IgA) anti-tissue transglutaminase (TTG) antibody is the preferred single test for detection of CD in individuals over the age of 2 years with specificity 95% or greater.  However, as IgA deficiency has an increased prevalence among celiac patients the possibility of IgA deficiency should be considered and total IgA should be measured.  An alternative approach is to include both IgA and IgG-based testing, such as IgG-deamidated gliadin peptides (DGPs).  However, in symptomatic cases with IgA deficiency a duodenal biopsy may be still indicated even if the IgG antibodies come back negative because IgG antibodies have lower specificity than IgA.   All diagnostic serologic testing should be done with patients on a gluten-containing diet to avoid false negative results. When screening children younger than 2 years of age for CD, the IgA TTG test should be combined with DGP (IgA and IgG).  In the NCGS patients the only known antibodies observed are the IgG antigliadin antibodies which, unfortunately, occur only in half of the patients.

The confirmation of CD diagnosis should be based on a combination of findings from the medical history, serology and upper endoscopy with histological analysis of multiple biopsies of the duodenum.  Symptoms or symptom response to a gluten free diet alone should not be used for CD diagnosis, as these do not differentiate CD from NCGS.  A diagnosis of NCGS should be considered only after excluding CD with appropriate testing.  People with CD should adhere to a gluten free diet for life (strictly avoid all products containing the proteins from wheat, barley, and rye).  While oats appear to be safely tolerated by most people with CD, oats should be introduced into the diet with caution, while patients should be monitored for evidence of adverse reaction.  Some micronutrient deficiencies to be considered in people with newly diagnosed CD are iron, folic acid, vitamin D and vitamin B12.  Patients should undergo testing and treatment for such deficiencies.

Bhagat G. et al. Trends in gluten research and its relationship to autoimmune and allergic diseases. Informatics in Medicine Unlocked 3 (2016): 7-14